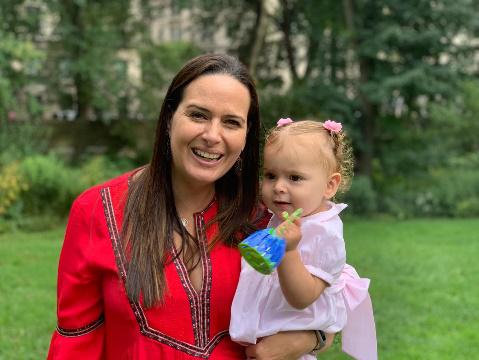 Born and raised in Haiti, in a trilingual household (French, English, Creole), Vanessa’s family traveled around the world and her parents, from an early start gave her a taste for discovering new languages and cultures. As a young adult and thereafter as a mother of four children, Vanessa developed a passion for the field of Bilingual Early Childhood Education.

Upon her arrival in New York in the year 2000, Vanessa concentrated her career in childhood development. During those years, she earned two Masters’ degrees from Columbia University: One in bilingual Education, the other in School Building Administration.

As an educator, Vanessa gained experience both in the classroom and outside the classroom. Vanessa was a proud Primary English teacher for 3 years and the English department coordinator for 2 years at the Lycée Français de New York. Vanessa was also a founding teacher for New York’s first public bilingual French Elementary school, PS58 in Carroll Gardens, Brooklyn. After that, she was also Curriculum Developer and Administrator for New York’s first French American Charter school in Harlem.

In the spring of 2014, after the birth of her third son, Vanessa launched her first daycare, “Petits Poussins”. In a short three-year-span, she created three other daycares/Preschools around New York City (West Harlem and Upper East Side): Arc En Ciel (2014-2015), Petits Poussins Too (2016) and Bilingual Nest (2017) were created under the umbrella of VHG Group Inc, Early childhood language schools. In 2018, Vanessa Handal-Ghenania an advocate for bilingualism, was nominated Knight to The Ordre des Palmes académiques (order of Academic palms) by the French government for her work in promoting the French language and culture in the United States. This nomination was a testimony to her work and achievement in the bilingual education field in the United States.

For Vanessa, “Petits Poussins Brooklyn is a dream come true! We are so excited to bring our ‘Top-notch’ bilingual education model and our passion for early childhood beyond Manhattan and right into Downtown Brooklyn! Our daycares and preschools all provide a bilingual curriculum, inspired by the Education Nationale and New York Department of Education, in French and English. Bilingual Nest also provides a bilingual Spanish option. We look forward to building our daycare/preschool with our Brooklyn community!”